DataArt executives participated in the 2005 Komen New York City Race for the Cure® on Sunday morning, joining more than 20,000 New Yorkers in their support for the fight against breast cancer.

Vica Vinogradova, DataArt's VP of Corporate Communications, ran with "100 Women in Hedge Funds" team, which raised over $30,000 to date and is the fifth largest contributor to the race this year. "Being part of this race was an overwhelming experience: it's empowering to see so many people support the cause," said Vinogradova. "Hearing breast cancer survivors tell their stories and seeing their determination to win this battle makes the necessity of finding the cure a tangible reality. I am grateful to my colleagues and friends for supporting me, and especially want to thank Bernie Sucher, Chairman of Alfa Capital, and Eugene L. Scott, Publisher of Tennis Week Magazine, for their generous contributions." 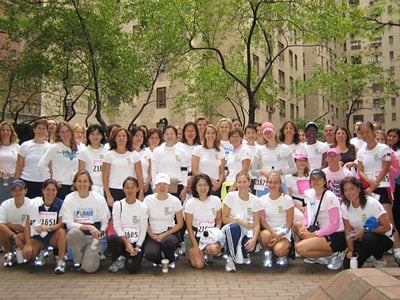 Besides raising almost $2,000, Vica recruited Alexei Miller, DataArt's EVP, to join the race. Alexei finished among the first 200 elite runners. "In our every day routine, we don't realize the toll that breast cancer takes on lives of women. But when you run surrounded by people wearing signs "in memory of", your perspective on things changes dramatically", said Miller. The Komen Race for the Cure® series is the largest series of 5K run/walks in the world. Since its origination in 1983, it has grown to an international series of more than 1 million participants. Last year the race raised almost $2.5 million for the fight against breast cancer.

The facts are grim: one in seven women will be diagnosed with breast cancer in her lifetime. The Komen New York City Race for Cure® raises money to fund education, screening and treatment programs for thousands of underserved women, in addition to national medical research. The fund raising drive continues through October 31, 2005. Please join DataArt in supporting this important cause!